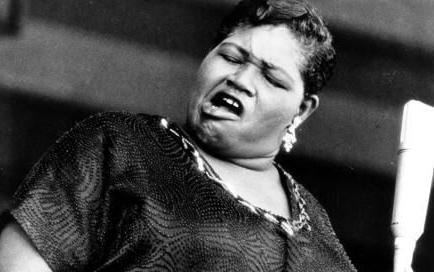 “Hound Dog” was first recorded by Willie Mae “Big Mama” Thornton August 13, 1952. Jerry Leiber and Mike Stoller (“Jailhouse Rock”, “There Goes My Baby”, “Love Potent No. 9”) are credited with writing this twelve-bar blues although many argue that Thornton’s additions to the song, written expressly for her, made it the hit it was.

Thornton born in 1926 in Montgomery, AL believed she never received the credit she should have for the song. She received only one check for $500 and never saw another penny from the song that spent seven weeks as number one on the 1953 Billboard R&B chart. Rolling Stone quoted her as having said, “Didn’t get no money from them at all. Everybody livin’ in a house but me. I’m just livin.”[ii] Big Mamma died penniless, her lifeless body found in a L.A. rooming house in 1984.

Elvis Presley covered “Hound Dog” in 1956 and sold over 4 million copies in the United States on its first release. It was his best-selling single and starting in July1956, spent a record eleven weeks at #1. It stayed in the #1 spot until it was replaced by “Love Me Tender,” also recorded by Elvis.[iii]

In March 2005, Q Magazine placed Presley’s version at number 55 in its list of the Q Magazine’s 100 Greatest Guitar Tracks. Rolling Stone magazine ranked it #19 on their list of the “500 Greatest Songs of All Time”—the highest ranked of Presley’s eleven entries.

Was “Big Mama” legally entitled to share in some of the rewards of Hound Dog’s success? We may never know because there is no record of copyright infringement ever having been formally alleged in the matter.

By now you may be thinking “c’mon, that was over 50 years ago, things have changed.” Yes, things have changed. Even when infringement cases are pursued to termination by judicial decision, the results are often not what either party anticipated. In 1971 Bright Tunes Music filed suit against the “Beatles” George Harrison in one of the best known music copyright infringement cases. Five years later in 1976, the trial judge found Harrison liable, but it wasn’t until 1981 that the damages were paid and the judgment dismissed. Bright Tunes Music (BTM) was awarded $1,599,987 for infringement of The Chiffons’ hit, “He’s So Fine” by Harrison’s “My Sweet Lord” The original award included 70% of the royalties for the offending single and 50% of the royalties for the entire album![iv]

The BTM case was over 30 years ago and indeed things have changed. Better informed artists, writers, and professional management entities may be inclined to litigate copyright infringement as BTM did, but the costs of doing so have soared to the point of being prohibitive!  Although not a music case, the 2008 Bratz doll copyright infringement case reveals the potential for astronomical legal fees. A 100 million dollar damage award to Mattel from MGA Entertainment racked up over 90 million dollars in legal fees (63 million for MGA and 30 million for Mattel) and threatened both company’s continued operations.[v]

Pursuing intellectual property cases to termination by trial can easily take five or more years to complete. And after completion, the plaintiff must still pursue collection of any amounts awarded.

The vast majority of copyright infringement suits do not go to trial, instead a settlement is usually reached between the parties. Settlements involving monetary compensation and an agreement to cease the infringing actions and/or a share of future revenues are common. Yet even negotiated settlements can literally take years to conclude.

Mediation is an alternative to this slow, cumbersome, and enormously expensive process:

Artists, songwriters, labels, and management can save substantial amounts of money and time, avoid adverse publicity, and mitigate enormous amounts of both personal and business stress by adopting mediation as their preferred method of dispute resolution. In the event a mediated agreement cannot be reached, all parties retain their right to pursue a court decision. Since evidence of conduct or statements made in the course of mediation is legally inadmissible, the parties literally have everything to gain and nothing to lose.

Charles A. Hill is a retired UC Berkeley administrator and the principal mediator of Charles A. Hill & Associates. He is a NCRC Certified, Rule 31 listed mediator practicing in the Nashville, TN area.

[iv] George Clanton. “Famous Acts of Plagiarism Within the Music Industry”, May 11, 2009 https://www.associatedcontent.com/article/1702513/famous_acts_of_plagiarism_within_the_pg2.html?cat=17