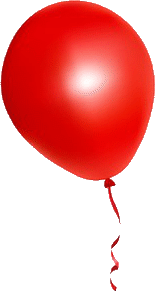 I would like to share a story from Dominic Milroy of the London Tablet: It features a red balloon, but not the red balloon in the 1956 award-winning short film by the same name.* That children’s fantasy story was set in Paris while this true story took place on a cold, grey day in London just before Christmas, on a crowded metro car where everyone was carefully avoiding all eye contact in the spirit of alienation, isolation and solitude that so often characterizes public transportation.

At the second stop, the author’s eye catches a splash of bright red, which turned out to be a large, shiny balloon in the hands of a small black child who was clearly delighted with his prize. It was not an ordinary balloon but a special, Christmas balloon, on a polished wooden stick with a bright gold knob at the top.

The mood of the subway car lightened just a bit as the boy entered the packed car with his family.

At the next stop, the heavy silence was shattered by the arrival of a fair-haired girl of about seven who was screaming as she clutched her father’s jacket. She was a Down Syndrome child. There was nothing anyone could do to comfort her, and everyone simply tried to pretend that she wasn’t there. Everyone, that is, except the little boy with the red balloon.

“First, I noticed him standing on tiptoe, with a look of concern as he tried to identify the source of the crying. Then he disappeared, but the shiny red balloon started making a slow bobbing journey down the carriage, held high on the stick above the heads of the crowd. When we reached the next stop and the doors opened, the little boy appeared next to me and stood in front of the little girl. As more people struggled into the train, he said, in a loud little voice: ‘Hello – this is for you – Happy Christmas – Goodbye.’ Then he disappeared into the crowded station.”

“The effect was instantaneous, electric, and cumulative. Everyone heard the words and turned to look at what was happening. The little girl stopped crying, clutched the balloon and started to show it to her father, to me, and to all her neighbors. That was what we had suddenly become: Neighbors!

It seemed astonishing at the time, that one small gesture could change the sense of everybody’s grim and silent alienation into the sudden warmth of community. I don’t know, of course, whether the boy was Christian, Muslim or ‘agnostic’, but what was clear was that he had quite simply given away to a complete stranger, what was at the moment his most precious possession.

We all had the sense that what had happened was important. How might the world be changed if everyone acted like that?”

“Remember, there’s no such thing as a small act of kindness. Every act creates a ripple with no logical end.” As the famous anthropologist Margaret Mead said:

“Never doubt that a small group of thoughtful, committed citizens can change the world. Indeed, it’s the only thing that ever has.”