Google Scholar returned “about 2,190,000 results” for articles on “Conflict Resolution.” Indeed, many highly accomplished and respected practicing mediators, as well as a few of my own colleagues regularly write and/or post articles on the topic. I too have posted articles and taught brief workshops on conflict resolution.

Much less often we find articles dealing with conflict preemption. I am guided by the definition of preemption found in the Encarta North American Dictionary: “action that makes it pointless or impossible for somebody else to do what he or she intended.”

A decade and a half in the ADR field has led me to ask the question: what about conflict preemption? Mediators strive to help parties de-escalate and resolve conflict that has already occurred. As ADR practitioners, shouldn’t we also devote time and effort to helping people learn techniques and tactics that might help them preclude conflict?

I began examining that question from an anecdotal, non-academic perspective without benefit of research, but with potential conflicts in situations involving a variety of individuals including couples divorcing, homeowners moving to newly shared communities, faculty members at a private school, young men confined to a mental health facility, residents of a large inner city pubic housing project, and inmates at a maximum security institution.

Mediating and conducting workshops in those environments led me to see preemption of conflict as possible when three supporting factors are considered: Time, Choice, and Relationship. These are the critical elements in my “Three Legged Stool for Conflict Preemption.” 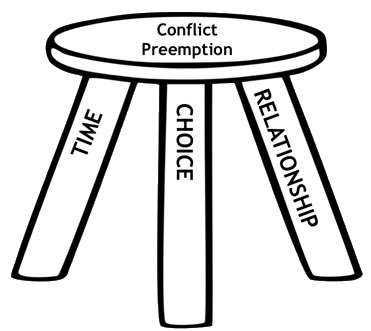 The first leg and what may ultimately be the most difficult to master is time. Viktor Frankl, psychiatrist, Holocaust survivor, and author of Man’s Search for Meaning, famously said:

“Between stimulus and response there is a space. In that space is our power to choose our response. In our response lies our growth and freedom.”

This strikes me as a fundamental element in our ability to preempt conflict. Time may be the most difficult of the three legs to gain control of simply because conflict stimuli occur so quickly and with such little warning that nature’s protective “fight or flight” reactions tend to trigger before more thoughtful responses can emerge. This almost instinctive response leaves little time for analysis, introspection, choice, or anything else. Nevertheless, if we learn to pause and work with, if not manage, the infinitesimal time that often exists between stimulus and response, we open opportunities for alternatives to fight or flight.

We can step back, pause, collect our wits, and see the situation objectively, as William Ury advocates with his “Going to the Balcony.” Imagine you are on a stage, then imagine yourself climbing onto a balcony overlooking the stage. That detached view may allow one to see the conflict in a more objective light almost as if looking as a third party and even envisioning oneself in the scene as one of the participants. Perhaps, in such a scenario, we can learn to respond rather than react! But first we must learn to pause and give ourselves the opportunity to access the higher level processing center in our brains.

Many other strategies and techniques for managing our response to conflict such as Michele McDonald’s acronym, RAIN: Recognize what is going on; Allow the experience to be there, just as it is; Investigate with kindness; and Natural awareness, which comes from not identifying with the experience; also rely on our ability to harness TIME.

As rationale humans we have options. The second leg of the stool is CHOICE and it encompasses the fact that we can learn to be selective in our response to a given stimulus.

But unlike animals, who are controlled almost entirely by their instincts, humans, if we condition ourselves to engage the rational part of our brains, can select from amongst several modes of response behavior. Although clearly not the only set of choices available, the five TKI modes serve as readily-differentiated choices we might employ. Studies in mindfulness and non-violent communications are opening us to an expanded array of choices we might select amongst in responding to signs of impending conflict. Understanding that choices actually do exist is a huge step in preemption!

The third leg of my conflict preemption stool, relationship, is perhaps the easiest of the legs to describe. It is simply understanding the nature of the relationship between people or groups. Is it an ongoing relationship as with family, friends, co–workers, bosses, customers, or is it likely that the parties may never encounter each other again? The impact of relationship on our approach to conflict preemption, management, and resolution is fairly obvious and need not be delineated here. Suffice to say that ongoing relationships are are likely to carry more relative value and consequently offer more reasons for unearthing tempered responses.

There is another dimension of conflict preemption that although very obvious, warrants deliberation:

For too many of us, the long term consequences of our response to conflict come into focus only after the fact. Perhaps this is once again where the severe TIME limitation hampers our ability to apply analysis, reasoning, and higher order thinking needed to assess how we might respond. This is particularly prevalent with young people who lack the maturity and life experiences necessary to vet their choices and think of them only in retrospect. Some neuroscientists say the human brain is not fully developed until age 25, and that may contribute to their inability to routinely consider consequences.

As depicted below, it may well be that our proverbial stool has four rather than three legs. For many of us, taking the long term consequences of our response to conflict into account is difficult at best and far too often it occurs only as an afterthought. That is why the graphic below depicts the fourth leg as somewhat of a less visible or greyed out, dotted line leg. 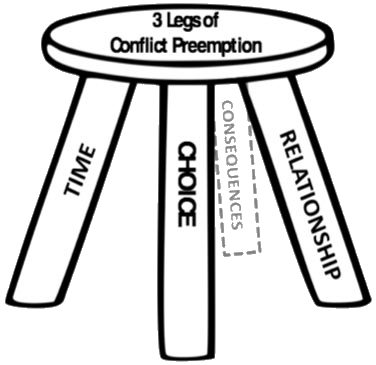